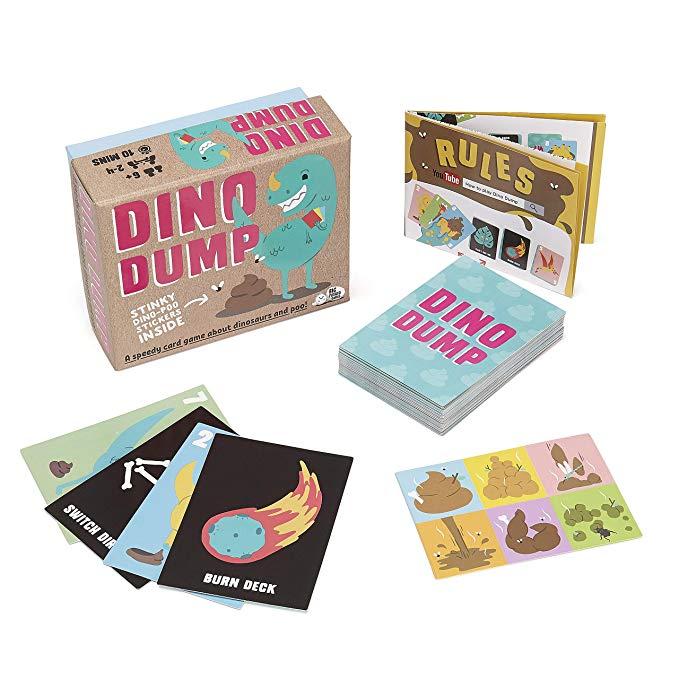 Dino Dump: The Prehistoric Kids Game with a Smelly Twist Introducing one of the newest items in Big Potato's range of games for kids. It's called Dino Dump, it's a kids game for age 6 and up and it's based on the classic adult card game Sh*thead. This time around, we've cleaned up the name, added some cheeky dinosaurs and made it about a hundred times easier to learn. We even added a bunch of scratch-n-sniff dino-poo forfeit stickers - just to keep things interesting. The aim of the game is to lose all of your Dino Cards as fast as possible. To do this, you'll need to put down dinosaur cards, hide under invisible leaves and throw meteorites at the other players in order to land them with the stack of cards. It's easy to learn, quick to play and on the list of gifts for kids under £10 - making it a great present idea for kids this Christmas. Dino Dump: The Prehistoric Kids Game with a Smelly Twist Just like most games for kids, the rules are simple. Here's how to play: Start by dealing three cards to each player and laying them face-down in a row. Then deal three more cards to each player and place them on top of the face-down cards. Finally, hand each player a hand of three more cards. The first player puts down any card they like. The next player must now play a number that's either the same number or higher. If a player can't go any higher, they have to pick up the whole discard deck. As well as the number cards, there's a bunch of Dino Power cards you can use, such as 'Back To One', 'Can't See Me', '4 Or Under', 'Switch Direction' and 'Burn Deck'. Once the cards in the draw pile and a player's hand have been used, they can start playing the three face-up cards in front of them. When those cards have been used up, the player must play the three face-down cards without looking at them. The first player to get rid of all their cards (including the cards in front of them), wins!