Home > Welcome to the Dungeon 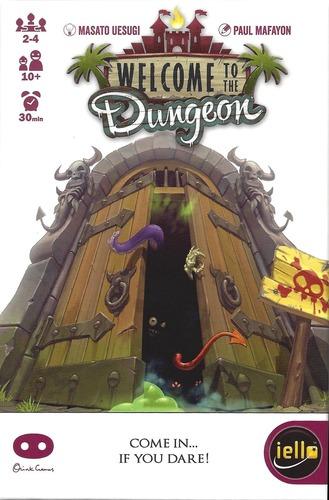 Welcome to the Dungeon

Welcome to the Dungeon Product Description

Welcome to the Dungeon  first released as Dungeon of Mandom  is a push-your-luck dungeon delve in which 2-4 players take turns essentially daring each other to go into a dungeon with less equipment than they start off with while filling the dungeon with monsters. Players can win the game by winning 2 rounds or get eliminated from the game by losing 2 rounds. Each player has a 2-sided players card that has a white side and a red side. The first win taps the player card and the 1st loss flips the card over to the red side. A 2nd loss will have the player turn the card back into the box.

The game is played in rounds. The player sets up the base character and all the equipment equipped. This represents every player as a fully equipped dungeon delver.

Each round, the start player (the person who challenged the dungeon last or the last player to be in a dungeon) can choose to draw a card from the monster deck or pass their turn.

If they choose to draw, they can do one of two things: (1) keep it and de-equip an equipment or (2) place it face down in the dungeon. Placing it face down in the dungeon creates the dungeon deck and fills the dungeon with monsters that the challenger will have to face later. If they choose to pass their turn, they cannot participate in the rest of the round. Once only one person is left after all the other players have passed their turn, that player then becomes the challenger and must go into the dungeon with only the equipment he has equipped.

The player then flips cards off the dungeon deck and fights the monsters within. Some equipment allow you to null the enemy damage or be able to withstand it by increasing your HP. If the player survives the dungeon with at least 1 HP, they win that round. If not, they lose. The players then reshuffles all the cards to make a new monster deck and re-equips all the equipment to start a new round.

The game ends when someone has won twice or one player is the last man standing.

Welcome to the Dungeon includes four different sets of character cards whereas Dungeon of Mandom has only a single character.