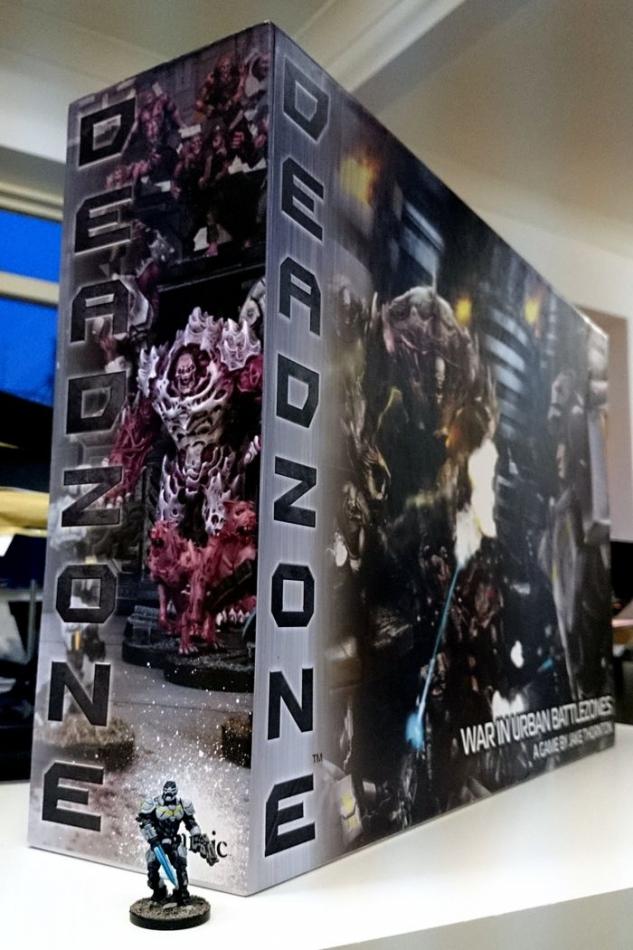 United Kingdom only (due to weight / size). Please Contact Us if you require shipping outside of the UK and we would be happy to help.

In Deadzone, you control an elite squad of soldiers and engage your opponents in furious fire-fights within the cramped confines of an urban battlezone.

With a simple set of rules for tactical and strategic gameplay, Deadzone contains everything you need to become the commander of your own elite squad and wage war across an Urban Battlefield.
ENFORCERS

The Enforcers are the Corporations elite peacekeepers, dispatched to tackle threats that are beyond the scope of regular military units. Each one is a superior soldier, trained in countless forms of combat and equipped with the best technology available.

As a unit they are disciplined and fearless, ready to lay down their lives to carry out the orders of their captain without a single question.
PLAGUE

Bloodthirsty monsters created by an alien virus, the Plague exist for one thing only  to spread their contagion as far as possible. The virus affects its hosts in a variety of ways; its earliest victims become towering hulks, filled with a steadfast will which drives their lesser kin...
REBS

The free-thinkers and dissidents of the Corporation will always find a home with the Rebellion. They do not stand alone, either; the galaxy is large and most races have reasons to hold a grudge against the Corporation. Coordinating their efforts from hidden bases deep in unoccupied space, Rebs raid isolated outposts to build stocks of munitions and technology, hoping one day to have the strength to stand up against the Council of Seven.
MARAUDERS

The Marauders were trained by the Corporation as shock troops and guards, but thats in the past - since the Mandrake Rebellion theyve become the terror of the shipping lanes.

They strike out at the GCPS with the very weapons with which they were outfitted, combining well-honed battle drill with brute force and low cunning.
BUILDING A BATTLEFIELD

Deadzone is a tabletop game played on a 2x2 battlefield, brought to life by the high quality Urban Gaming Mat and amazing modular plastic scenery.

This creates a truly 3D gaming environment with buildings to hide in, cover to duck behind and the freedom to go up - particularly handy if youre a deadly sniper looking for a good vantage point.

Whether you choose to build your tiles as 1-storey structures or towering look-out posts, this clip-together scenery can be built in a variety of ways, with any combination of tiles.

There are also versatile accessories to further enhance your battlefield, such as barrels, railings, ladders and more.

These provide great cover for your troops, allowing them to move out of sight of the enemy.

After all, when the guns start blazing and the Plague are swarming your position, being out in the open is the fastest way to get your squad killed.
VENTURE INTO THE DARKNESS...

The Deadzone Rulebook includes a dedicated campaign section for running a series of linked games.

Venture into enemy-held territory, capture sensitive intelligence, assassinate key commanders and devastate opposing forces - a campaign can be both frantic and exhilarating, resulting in unforgettable moments of luck and desperation.

Whether youre playing at home, at a gaming club or at your friendly local gaming store, youll soon find yourself creating stories around your games as your Strike Force evolves from a fledgling unit to a group of hardened veterans, accompanied by deadly veterans.

Its all part of the fun of Deadzone!