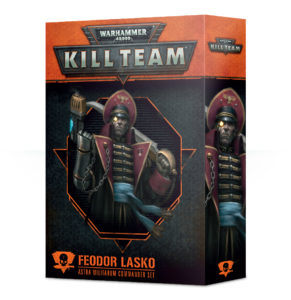 Each Kill Team: Commander kit comes with a multi part plastic miniature as well as the tokens, data cards and rules necessary to field your chosen Commander in a game of Warhammer 40,00: Kill Team.

Add a Commander  a powerful hero character with unique abilities and rules  to your Astra Militarum kill team with this set. It contains a multipart plastic Officio Prefectus Commissar miniature, a set of cards packed with exclusive rules and a sheet of tokens for use in-game:

- An Officio Prefectus Commissar: this multipart plastic kit is used to represent Feodor Lasko  or the Commander of any Astra Militarum kill team you wish  clad in the striking, authoritarian uniform of a Commissar, equipped with either a bolt pistol or plasma pistol at the end of his bionic right arm, his left hand wielding a power sword
- A datacard for Feodor Lasko, featuring his characteristics, weapons, abilities and specialisms, along with a card featuring his background
- A card featuring Feodor Laskos skill tree  Officio Prefectus Commissar specialisms which can only be used by that character
- 5 Astra Militarum Commander Tactics Cards, including 2 Tactics exclusive to this set
- A sheet of tokens for use in games of Kill Team  this includes 1 Move/Charge token, 1 Fall Back/Advance token, 1 Ready/Shoot token, 6 Tactic/psychic power tokens, 3 wound tokens, and 3 objective tokens.