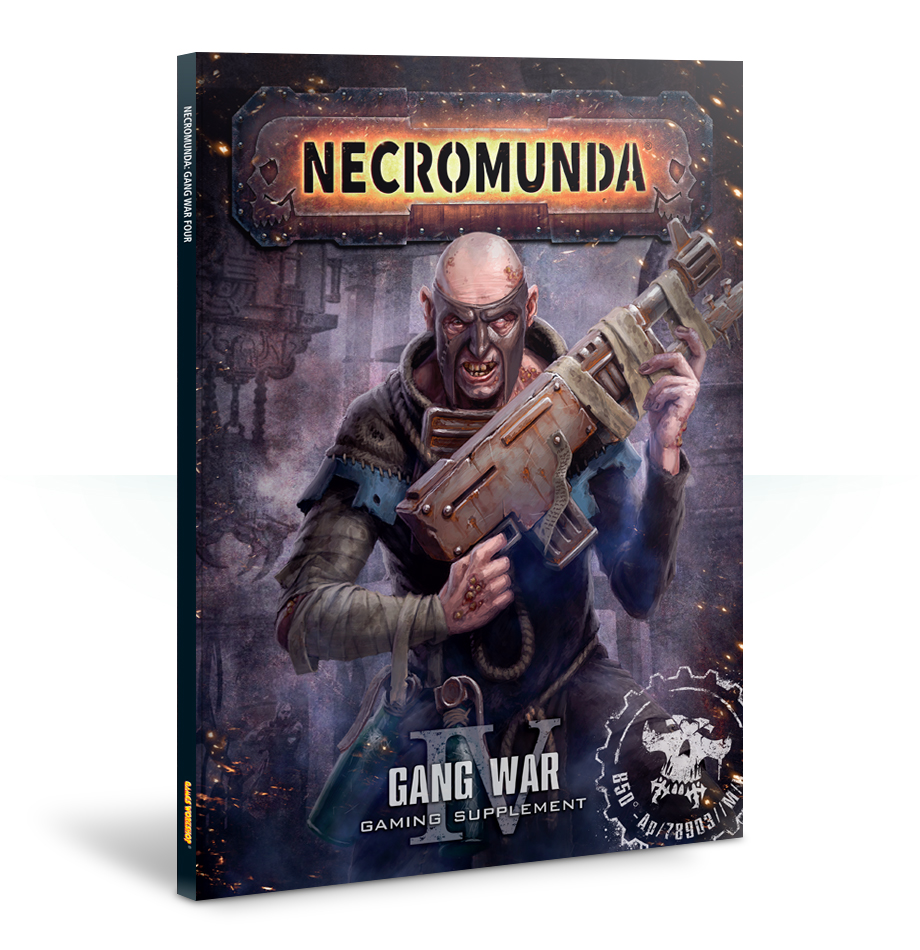 This book contains rules for your Cawdor gangs as well as a whole host of upgrades and new units for every gang. Also included is the new Dominion Campaign, new skills, physic powers and scenarios.
Contained in the 96-page softback:

- Gangs of House Cawdor: This section contains the story of House Cawdor, who have taken the message of the Cult of Redemption to heart more fervently than any other clan  unearthing blessed relics from the garbage, bodging together tools and building weapons with which to give themselves utterly to the Emperor. This includes a detailed breakdown of their place in the hierarchy of Necromunda, and the methods by which they exact violence upon their rivals. It also contains full rules for founding a House Cawdor gang, with gang composition and an exhaustive equipment list;
- Bionics: a selection of 7 bionic upgrades for fighters of every gang, used to repair damage sustained as a result of violence and hardship  if you have the funds, injuries can be fixed or even avoided altogether with a brief visit to a techno-chirurgeon;
- Skirmish Games: not everyone has the time to commit to a full campaign  to that end, Gang War 4 includes rules for creating gangs to use in standalone skirmishes, complete with extra skills, characteristic increases, access to weird and wonderful Rare Trade equipment and even Hangers-on and Hired Guns. Theres also guidance on using these rules in a tournament setting;
- Exotic Beasts: add Sheen birds to your House Cawdor gang with this section, expanding upon the Exotic Beasts rules found in Gang War 3;
- House Brutes: this adds new Brutes unique to each of the Great Houses of Necromunda. Includes: Escher Khimerix, Goliath Zerker, Orlock Lugger Cargo Servitor, Van Saar Arachni-rig Servo Suit, and Cawdor Stig-Shambler;
- The Dominion Campaign: a brand new territory-based campaign system, Dominion Campaigns are an exhaustive campaign format which can be used instead of Turf War. Gang War 4 includes everything you need to set up and run a Dominion Campaign, including advice on campaign length, generating territories, founding gangs (with a blank roster for your own use), recruiting new fighters, gaining experience, the role of an arbitrator, advancements, gaining skills, lasting injuries, captured fighters. It also includes detailed pre-and-post-battle sequences determining how to set up your games, visiting the Trading Post, gain and control territories, and determine the criteria for your overall victor;
- New Scenarios: 6 scenarios that can be used in a Skirmish game, Campaign game or Arbitrated game: The Hit, Settlement Attack, Escape!, Murder Cyborg, Escort Mission, and Fighter Down;
- Psychic Powers: rules for using Psykers and their Wyrd Powers in games of Necromunda, with rules for Sanctioned and Non-sanctioned Psykers along with Perils of the Warp;
- Skills: a fully up to date list of all the skills available to fighters;
- Rules and background for the following Hired Guns: Slate Merdana, Orlock Road Boss and Macula his Cyber-mastiff;
Baetrum Arturos III, Guilder Bounty Hunter; and Ortruum 8-8, Psykanarium Bounty Hunter.