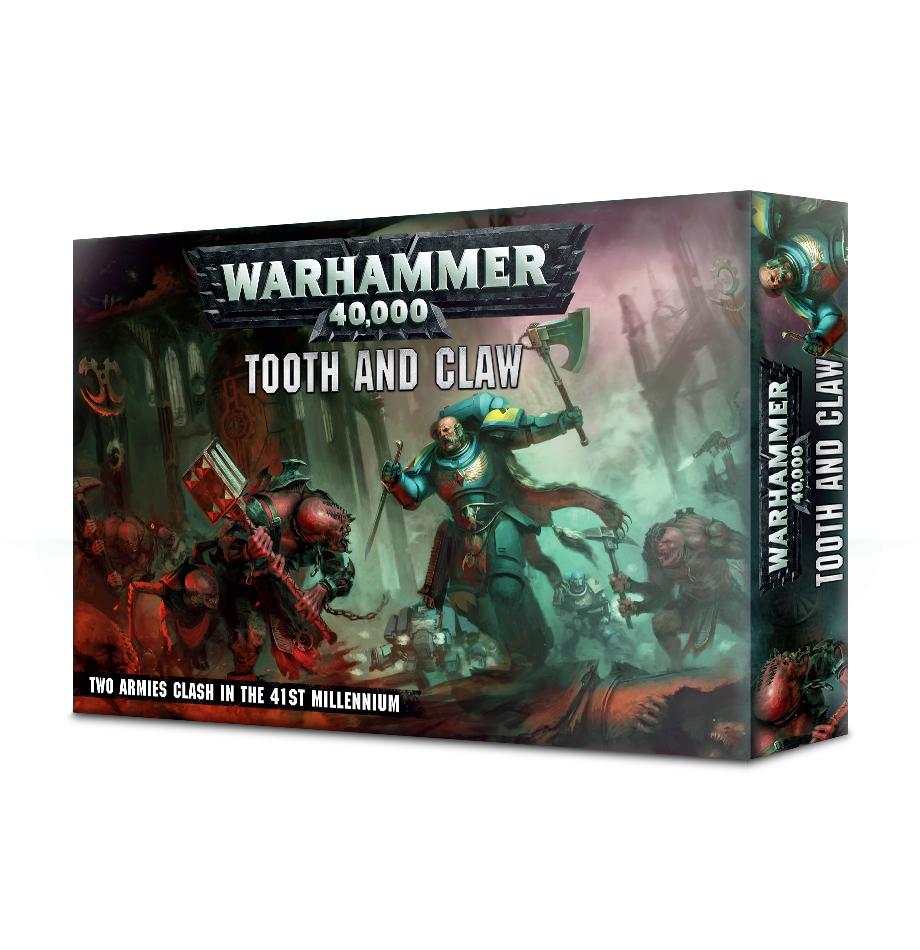 Tooth and Claw A 40-page softback book containing: - War Zone Vigilus: a brief history of this embattled world  a vital supplier of materiel for the Imperium  and the emergence of its massive Genestealer Cult uprising; - Space Wolves: an overview of this Chapter, and their mission to hunt down the biggest threats in the galaxy which has led them to Vigilus; - Genestealer Cults: a primer on these twisted groups of militant fanatics, who spill from the shadow to choke entire worlds; - Horror in the Hollows: describing the vast system of underground reservoirs beneath Vigilus where, unbeknownst to those on the surface, the Genestealer Cults are massing; - A Howl in the Night: the story of Haldor Icepelts interception of the distress calls from Vigilus, and his Space Wolves strike forces arrival; - Detailed background information on each unit included in the box; - A miniatures showcase featuring a beautifully painted examples of the miniatures in Tooth and Claw. Rules - 9 datasheets providing rules for each of the included miniatures; - 4 Echoes of War missions, which can be linked together to form a small campaign echoing the narrative of Tooth and Claw. This includes City of Traps rules, which simulate the devious Genestealer Cults methods of fighting on home turf; - Points values for every included miniature, for use in Matched Play. Miniatures Space Wolves - 1 Space Wolves Primaris Battle Leader, representing Haldor Icepelt, who is armed with a bolt carbine and power axe. Posed storming forth with weapons primed, he can be modelled with or without helmet; - A Primaris Redemptor Dreadnought, with a choice of gatling cannon or plasma incinerator on the right arm, with a Redemptor fist and heavy flamer support weapon or gatling cannon on the left, 2 chest-mounted fragstorm grenade launchers or storm bolters and a carapace-mounted Icarus rocket pod for aerial denial; - 5 Primaris Intercessors, armed with a choice of 3 bolt rifle variants, with options for a Sergeant; - 3 Primaris Aggressors, armed with a choice of auto boltstorm gauntlets or flamestorm gauntlets, with options for a Sergeant; - A Space Wolves Primaris Upgrade frame, featuring 5 Intercessor shoulder pads, 1 Intercessor Sergeant shoulder pad, 3 Aggressor shoulder pads, 3 heads, unmistakably Space Wolf in origin  1 helmeted, 1 with mohawk and beard, 1 with fully spiked hair, 1 right arm holding a chainsword, 1 left arm drawing a knife from its sheath and 7 accessories: 2 wolf tails, 2 pouches, 1 necklace, 2 diamond shaped amulets. Genestealer Cults - 1 Genestealer Cults Abominant, a hulking brute in chains and shackles, accompanied by a mindwyrm familiar and clutching a power sledgehammer; - 5 Aberrants, which can be armed with rending claws and either power picks or power hammers, depending on the arms you choose to model them with  this includes 17 (!) different heads and options for a Hypermorph; - An Acolyte Iconward, armed with an autopistol and blasting charges, clutching hi cults sacred banner; - 5 Hybrid Metamorphs, armed with autopistols, Metamorph talons, blasting charges and rending claws. Included are hand flamers, a heavy rock saw, a heavy rock drill (with backpack), a heavy claw cutter and options for an Metamorph Leader, who can take a bonesaw; - 8 Genestealers, multi-limbed monstrosities are armed with rending claws and scything talons, and the kit includes a number of toxin sacs along with an infestation node.