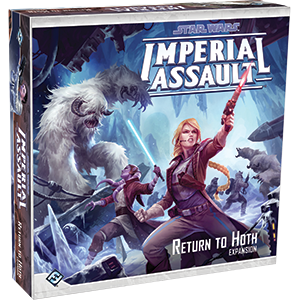 The secret Rebel base on Hoth has been discovered by the Empire. Imperial Star Destroyers blockade the planet from above and Imperial forces descend the surface, led by Darth Vader, and bringing the battle to the entrenched Rebels. As the Rebel heroes flee from the icy planet of Hoth, they have no idea that events ahead may force them to make a desperate gamble and return to the dangers of Hoth!

Return to Hoth is a new expansion for Imperial Assault, offering new content for both campaigns and skirmishes. A brand-new full-length campaign invites you to escape the aftermath of the Battle of Hoth and protect a colony of Rebel refugees from the depredations of the Empire. Meanwhile, four new skirmish missions bring your forces to the icy expanses of Hoth and new rules for four-player skirmish games invite you to experience massive, multi-fronted skirmishes with up to three opponents!