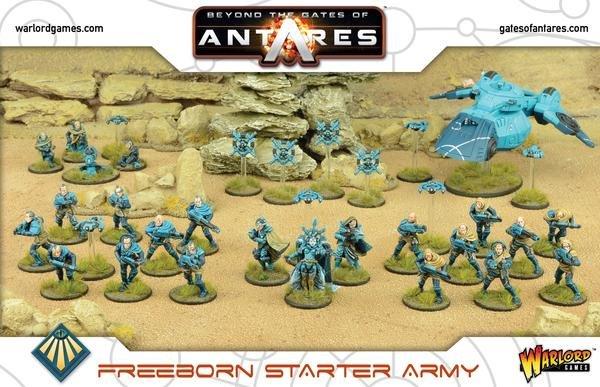 The Freeborn are raised and live upon spacecraft plying the trade routes of Antarean space, facilitating commerce and ready transport throughout the Nexus and between antagonistic states and even races of diverse and strange kinds, and none range so widely or so confidently across the perilous wastes of the blazing Antarean surface.


Freeborn are divided into numerous Houses  which they call Vardos, each ruled by the head of its leading family  the Vard. When fighting forces are required they are assembled by the Vards cadre of professional troops, often led by members of the ruling family.

The troops in this army represent one such force. It includes two reinforced squads of Domari troopers. with a choice of armaments for each squad. They are led by a lavishly equipped Freeborn Captain and two bodyguards. These units are accompanied by a well-armed Transporter Drone, capable of carrying troops but also of providing some armoured support. For further support the force also includes a weapon team armed with a Mag Light Support, and a shard of Targeter probes, It is a powerful force with an excellent mix of capability, ready to destroy anyone foolish enough to dispute possession of the Freeborns latest discovery.

This huge value army is ideal for forming the basis of any Freeborn collection allowing you to add your choice of tailored units to bring it up from 500 points to a full Battle Force of 1250 points or larger.