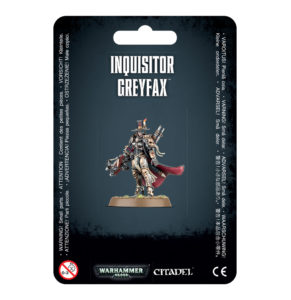 This multi-part plastic kit contains the components necessary to assemble Inquisitor Greyfax. An incredibly imposing figure, she is clad head to toe in master-crafted power armour, which is covered in details  Inquisitorial sigils, skulls and ornate seals all feature heavily. She holds a master-crafted condemnor boltgun in her right hand, which couples the iconic might of the imperial bolter with a secondary launcher that fires blessed silver stakes  truly a powerful weapon against Chaos. A large master-crafted power sword is visible beneath the her cloak, which billows beneath a backpack covered in dials and exhausts. The model is topped off by a wide-brimmed hat which on some models might seem ostentatious, but is entirely appropriate framing the face of Greyfax, which features the Psyocculum  the Eye of the Emperor. This kit comes as 13 components, and is supplied with a Citadel 40mm Round base.