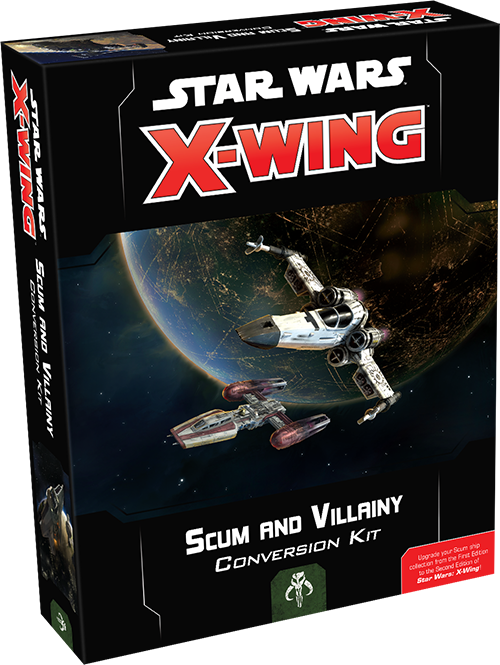 Driven by their desire for profit, bounty hunters will relentlessly pursue their quarry to the farthest reaches of the galaxy. Far from the uniform ranks of the Rebellion or the Empire, these mercenaries often inject their own style and flair into their work. With the Scum and Villainy Conversion Kit, you can take your own ragtag band of bounty hunters into X-Wing Second Edition right away.

The Scum and Villainy Conversion Kit contains everything that you need to take your existing collection of first edition Scum and Villainy ships into the game's second edition. Here, you'll find an assortment of second edition punch board, ship cards, and upgrade cards, letting you bring the galaxy's most dangerous beings to life on your tabletop. In addition to being present in the Scum and Villainy Conversion Kit, all of the Scum and Villainy ships and upgrades found in the conversion kit will be fully implemented in the X-Wing Second Edition squad-builder at launch, giving you the opportunity to experiment with a full complement of new content. Likewise, first-time players can use the conversion kit and first edition expansions to get a feel for the game with as many different ships as possible!