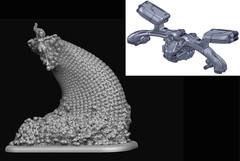 While little that is known of PHR Siren corps, one thing is very clear; these women are the elite, and exceptionally few in number. However even among the rarest individuals there are exceptional specimens  those whose innate affinity with their technological enhancements allow them to effortlessly control many hundreds of viewpoints with ease, and many thousands with dedicated training and further honing of their talents.

These are the Medusae, the 0.0001 % of the PHRs population capable of harnessing the power of thousands of slaved Familiars to their will with devastating effect. In battle, a Medusa will appear to \'fly\', levitated on a swarming, seething pillar of nanomachines and Familiars, sowing destruction and aiding her allies in combat until the enemy is utterly destroyed.

The Triton X is a specially modified transport for Medusa units. The fact that the PHR has created a specific transport to carry these exceptional women into the fray reflects their immense power. It also has the capacity for additional nanomachines, which can replenish and repair any losses that the Medusa\'s swarm might sustain from enemy fire.