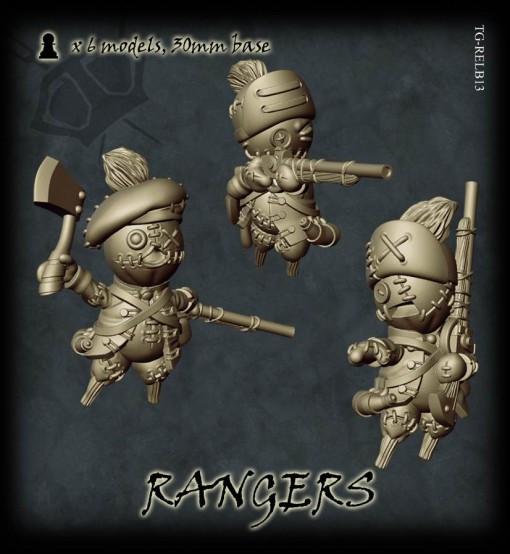 The puppet rangers of Britana are the finest all terrain outfit in King Jorjes army and are able to navigate their way through any environment with incredible ease. It is in the murky swamps of Relicia however where their skills needed the most and whenever a Cthu uprising is detected they are always amongst the first regiments that are deployed in response by high command. Rojors Rangers are undoubtedly the most famous of all the Ranger Companies but there are many other ranger units that have exceeded expectations to prove their worth. The Rangers of the 14th Wolvornian Ranger Company for instance are a hardy bunch and unmistakable on the battlefield. Cut from a tougher material than the majority of soldiers within King Jorjes army and laden with an impressive assortment of trophies gathered over the years from countless pivotal campaigns, their faded royal blue patchwork ensures they stand out boldly amongst their puppet brothers.