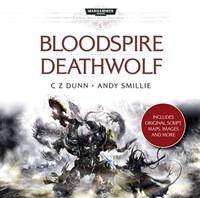 THE STORY
The Space Marines take to the skies in this pair of audio dramas. On the world of Axonar, a squad of Blood Angels Scouts scale the dizzying heights of a mighty hive city as their battle-brothers fight far below. Their objective: to open the way for a daring aerial assault that will crack open the city and ensure victory. In the heavens above Luetin Hive, Erik Morkais Space Wolves clash with dark eldar raiders, jump-pack clad Blood Claws taking the battle to the aliens own infernal airships. But the war will be decided by Morkai himself as he challenges the dark eldar archon to single combat.

ABOUT THE AUDIO
Two action-packed Space Marine audios in an exclusive double-disc set. Includes wallpapers and other extra content.