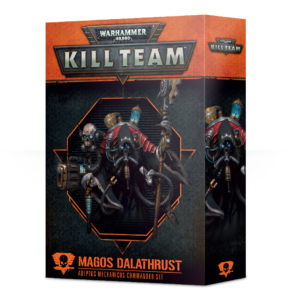 Add a Commander  a powerful hero character with unique abilities and rules  to your Adeptus Mechanicus kill team with this set. It contains a multipart plastic Tech-Priest Dominus miniature, a set of cards packed with exclusive rules and a sheet of tokens for use in-game:

- A Tech-Priest Dominus: this multipart plastic kit is used to represent Magos Dalathrust  or the Commander of any Adeptus Mechanicus Kill Team you wish  a Tech-Priest augmented to the point of being almost entirely cybernetic, scuttling on several insectile legs which poke out from beneath a tattered robe; this only adds to the sinister air provided by his choices of armament with a volkite blaster, a macrostubber, an eradication ray, a phosphor serpenta and a power axe  his badge of office  and detailed with a microphone and loudspeaker
- A datacard for Magos Dalathrust, featuring his characteristics, weapons, abilities and specialisms, along with a card featuring his background
- A card featuring Magos Dalathrusts skill tree  Tech-Priest Dominus specialisms which can only be used by that character
- 4 Adeptus Mechanicus Commander Tactics cards, including 2 Tactics exclusive to this set
- A sheet of tokens for use in games of Kill Team  this includes 1 Move/Charge token, 1 Fall Back/Advance token, 1 Ready/Shoot token, 6 Tactic/psychic power tokens, 3 wound tokens, and 3 objective tokens.