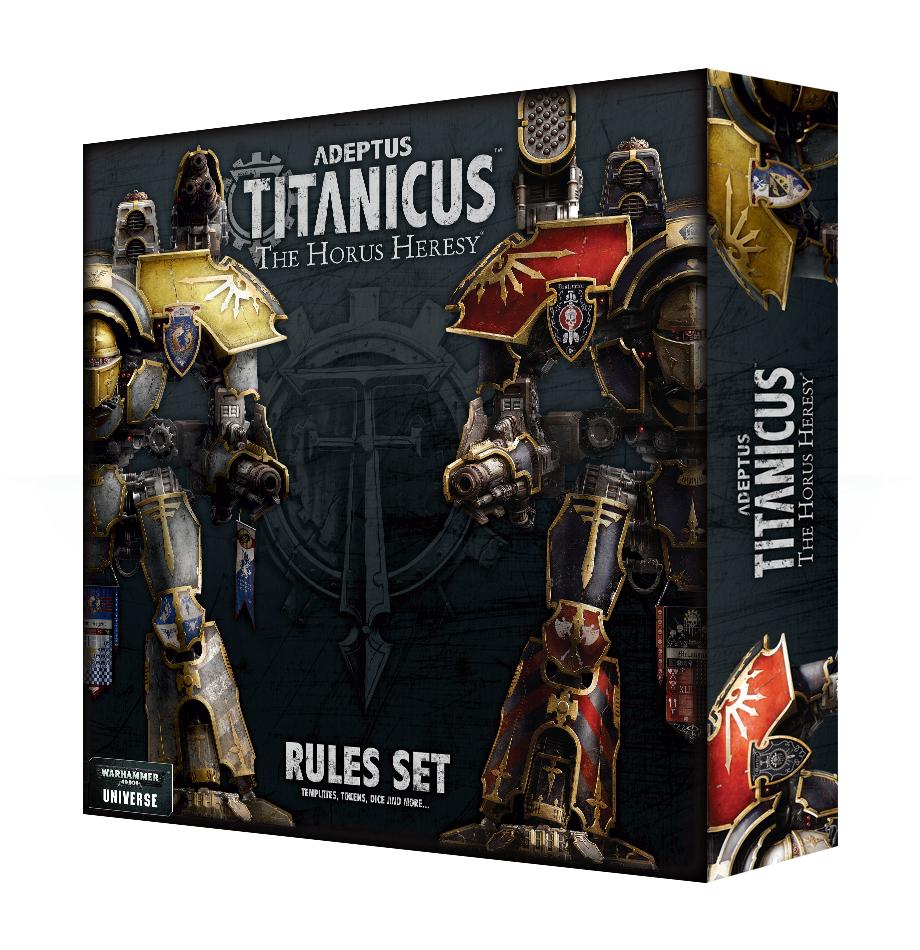 The Rules Set includes a 96-page hardback book containing all the rules needed to play games of Adeptus Titanicus, from basic movement and resolving attacks through to advanced and optional rules which add incredible depth and tactical complexity. Along with the comprehensive rules manual, a host of accessories are included  Command Terminals, Battlefield Assets and more:

In the 96-page rulebook, youll find Basic, Advanced and Optional rules for play, along with detailed background on the Titan Legions, their creation and battles prior to  and during  the Horus Heresy.

- The Imperium of Mankind: while no complete archive of the history and events that shaped Mankinds ascent to galaxy-spanning rulers exists, archaeodata can be used to piece together information on the Empire of Old; the relationship between Terra  the seat of the Emperor  and Mars, home of the Cult Mechanicum; the Unification Wars and Great Crusade; the Collegia Titanica and the creation of the Titan Legions; and the shattering civil war of the Horus Heresy. Such information is presented here;
- Selected Notable Engine-wars of the Age of Darkness: when the god-engines go to war, the galaxy itself holds its breath  here is a record of numerous conflicts between these towering machines, from the Betrayal at Isstvan III, the Death of Tallarn, through to the Imperial Muster at Beta-Garmon;
- Throughout the book are presented annotated schematics and blueprints of a variety of Titans, along with examples of composition, heraldry and colour schemes of Knightly Banners and Titan Maniples;
- Rules Introduction: Adeptus Titanicus can present a daunting prospect at first, with the Advanced Rules being a comprehensive guide to piloting a Titan  the Introduction section of this book is designed to ease you into the way this game is played, with annotated photographs demonstrating the setup, showing a battle in progress and clearly explaining how each accessory  the Command Terminals, dice and arcs, particularly  is used;
- Basic Rules: covering everything players need to know in their first few games, this section explains Rounds  between 4 and 6 per game  and the 5 Phases  Strategy, Movement, Damage Control, Combat and End  of which each Round consists. Each Phase is explained as an overview, with suggestions of Advanced Rules to add as you become more familiar with the games flow. Included is a mission  Titanic Clash  designed for use with the Basic Rules;
- Advanced Rules: once players are familiar with the Phases and flow of Adeptus Titanicus, its time to step up and begin piloting your Titans with Advanced Rules. This section introduces Stratagems, which are special abilities defined by the mission being played, and the issuing of Orders, which confer a bonus  and a concurrent disadvantage  to your models. Terrain effects are introduced here  even the god-machines can run into difficulty on a rubble-strewn battlefield  as well as the effects of pushing your Titans Plasma Reactor; while this provides you with more power for cataclysmic salvos of fire, it also drastically increases the chance of a dramatic overheating scenario. A canny Princeps understands how to manage this risk! As well as this, there are rules for Awakening the Machine Spirit, an unpredictable and unusual set of conditions which can be set by the vital force at the heart of each Titan, overriding the crews wishes in ways which can prove advantageous. Finally, this section provides rules for fielding squadrons and banners, supporting one another with coordinated strikes and overlapping void shields;
- Optional Rules: while not necessary for a game, the rules in this section can be used to add complexity and depth for those who really want to triumph over the adverse conditions found when trying to guide a Titan to war. Overloaded void shields, destroying terrain, management of the very routing of power systems, and dealing with the consequences of stray shots are all covered here;
- Assembling a Battlegroup: advice on assembling your Titans into a battlegroup, with maniple configurations and personality traits for your battlegroups leader;
- Fighting a Battle: 3 different ways of enjoying the brutal combat and evolving stories youll act out while playing are outlined here  Narrative, Matched and Open Play. Open Play concentrates on the models themselves, with no restrictions  simply place whichever Titans on the board you wish, and fight; Narrative Play uses missions to tell a story, and Matched Play balances the sides to make games pure tests of strategic ability. 6 missions are included, with advice on designing your own;
- Legions of the Adeptus Titanicus: descriptions and rules for Legio Gryphonicus and Legio Tempestus, each with its own Legion Trait, specific wargear, and choice of Princeps Seniores Personal Trait.

There is included a host of gaming accessories necessary for playing Adeptus Titanicus: