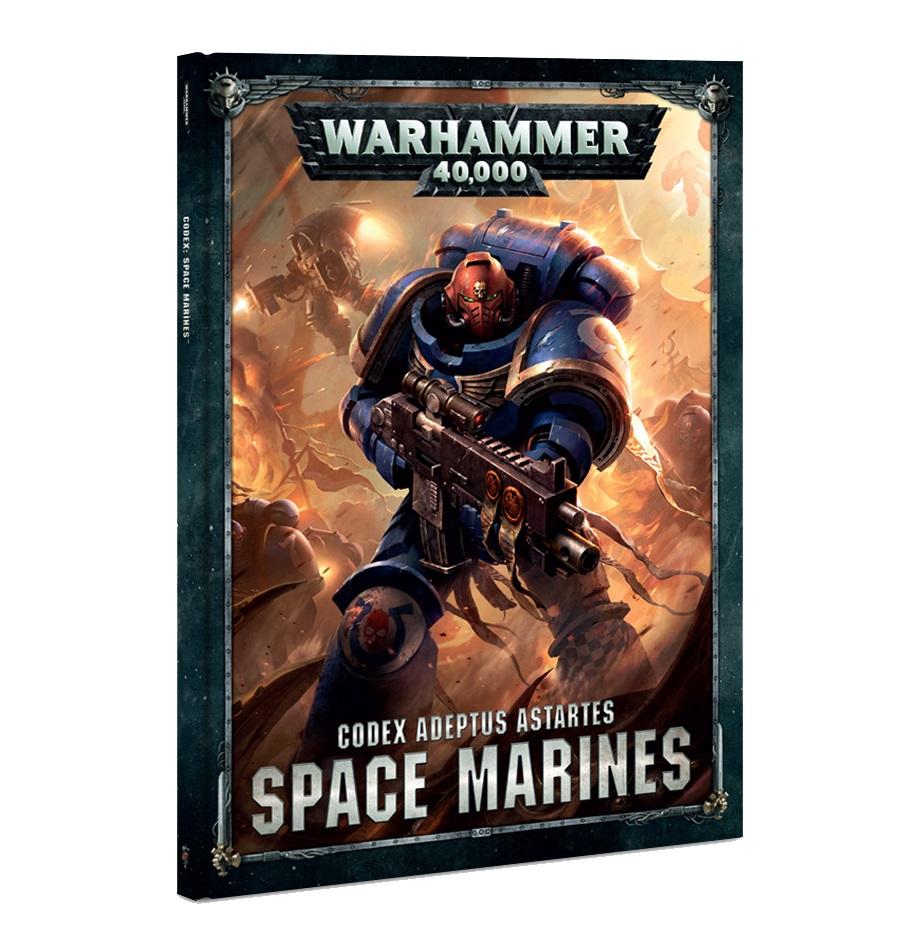 Codex: Space Marines is a 208-page hardback containing a wealth of background and rules  the definitive book for all Space Marines collectors. Within its pages, youll find: Background - The Emperors Finest: the origin of the Space Marines, with a guide to the original Legions and their successor Chapters, a detailed breakdown of the methods, technology and rituals behind the creation of these superhuman soldiers and an explanation of how their Chapters are organised, with guides to heraldry and markings; - Imperius Dominatus: an annotated map of the galaxy, showing the full, dreadful extent of the Cicatrix Maledictums reach, and the Chapter homeworlds it has cut off; - A Brotherhood at War: a timeline featuring some of the most important battles and events in the Space Marines struggle against the darkness, leading up to the faint glimmer of hope that is the Indomitus Crusade; - Chronicles of Ultramar: an in-depth guide to the Ultramarines, their homeworld Macragge, the composition of their infamous 2nd Company, a timeline of their heroic history and a brief overview of their successor Chapters; - Guides to the White Scars, Imperial Fists, Crimson Fists, Black Templars, Salamanders, Raven Guard and Iron Hands Chapters, with timelines of major battles, as well as descriptions and colour schemes of their successor Chapters; - Explanations of the fighting forces available to all Space Marine Chapters including heroes, squads, vehicles and special characters. Also included is an inspiring showcase of beautifully-painted Citadel miniatures, depicting Space Marines of every type doing battle in the colours of each founding Chapter. Rules This book contains everything needed to get a Space Marines army ready for war! A huge collection of rules content is within: - 85 datasheets covering the entire Space Marines range  including the Primaris Space Marines; - Points values for all miniatures, weapons and wargear for use in Matched Play games; - Army abilities and wargear lists, alongside a brief explanation of their use and the use of keywords; - Rules profiles for every piece of wargear and every weapon in the Space Marines arsenal; - Rules for Battle-forged armies, including abilities for Space Marines armies and specific Chapter Tactics for Ultramarines, White Scars, Imperial Fists, Black Templars, Salamanders, Raven Guard and Iron Hands Chapters, reflecting their unique fighting styles; - 26 Stratagems for Battle-forged armies, reflecting the varied tactics used by Space Marines commanders on the battlefield; - 6 Warlord Traits, for use with any Space Marine Warlord, with Chapter-specific Warlord traits for Ultramarines, White Scars, Imperial Fists, Crimson Fists, Black Templars, Salamanders, Raven Guard and Iron Hands; - Chapter Relics: special weapons and wargear wielded in battle by Space Marines characters; - the Librarius psychic discipline: 6 psychic abilities for use by Space Marines Librarians; - 6 Tactical Objectives for use by Space Marines armies.