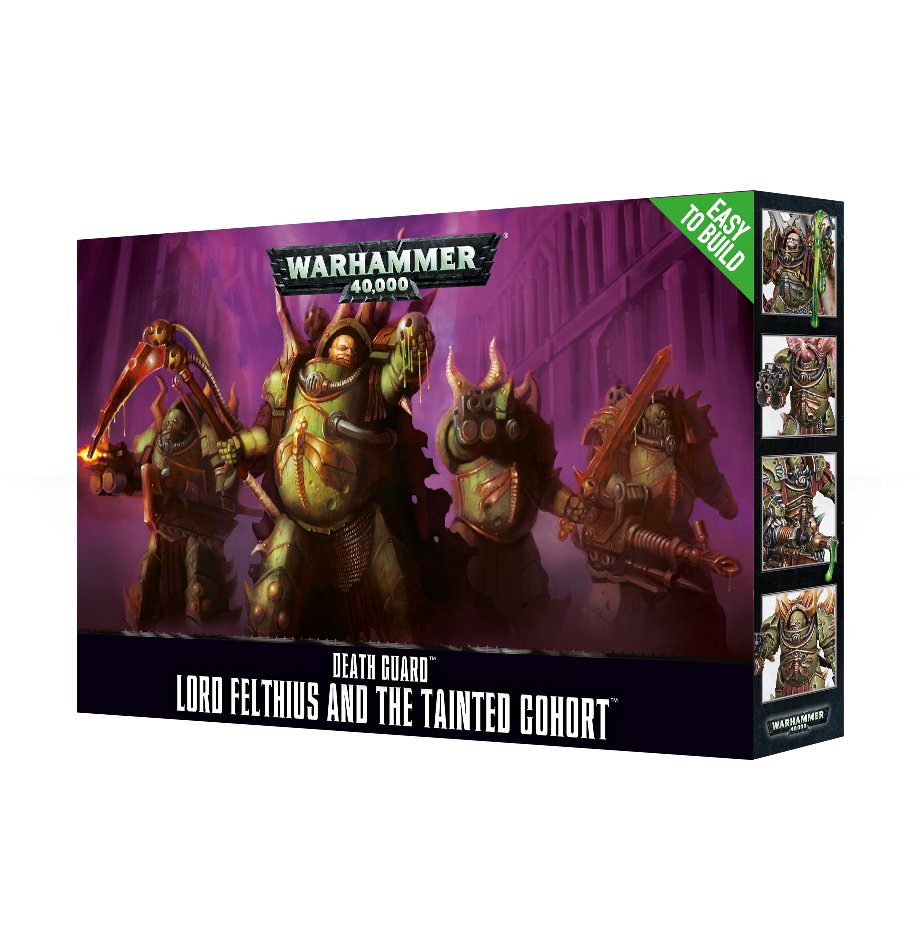 Easy to Build Lord Felthius and The Tainted Cohort

Designed to be as easy as possible to assemble for new hobbyists while being detailed enough for the hardiest veteran to appreciate, this set contains Lord Felthius, a Death Guard Chaos Lord in Terminator Armour and his Tainted Cohort, made up of 3 Blightlord Terminators. Push-fit, with no glue required, these are incredibly straightforward to put together, and come on pre-coloured green plastic sprues. Lord Felthius is a particularly fine example of a Chaos Lord who truly loves his work  despite (or possibly because of) his pitted, rotting Terminator armour, his face is modelled in a cheerful rictus, staring proudly at the plague censer held aloft in his right hand which is dripping viscous fluids of an unpleasantly diseased nature. His armour is decorated with chainmail, furs and a boil-covered cloak, and the manreaper in his left hand features connectors and pipes that allow it to secrete diseased fluids that infect everything it touches. His accompanying Tainted Cohort are no less horrific  3 Blightlord Terminators. These are armed with the following: 1 carries a combi-bolter and balesword, 1 carries a combi-bolter and bubotic axe, and 1 wields a plaguespewer which is a bit, well, dribbly. Each has the horrible, rusted marks of Nurgle you would expect, and the Blightlord Terminator with the balesword is literally bursting with bubo-covered tentacles  theyre sticking out of where his face should be There are even 3 extra little pieces of detail for the bases of these miniatures  3 Nurglings, 1 pulling the pin from a grenade, 1 with a rather sinister grin and 1 which is little more than a quivering, meaty clump of tentacles. This plastic kit comes as 26 components, and is supplied with 4 40mm Round bases. Rules for these miniatures are included in the box.