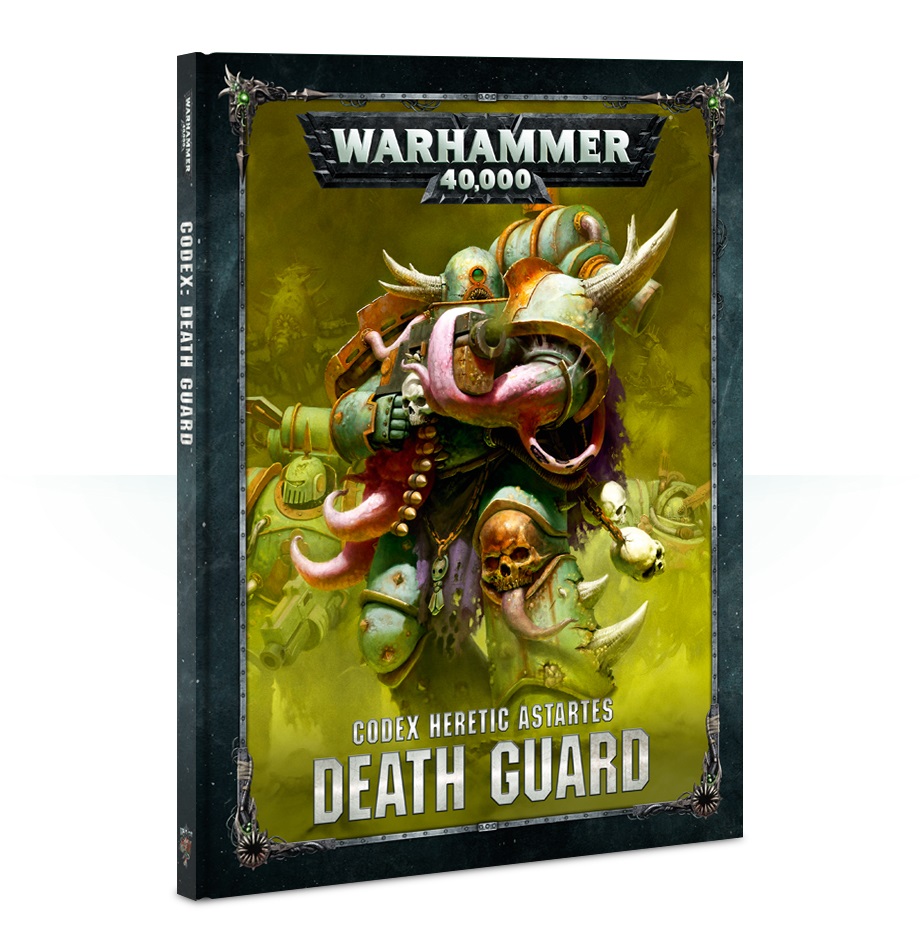 Codex: Death Guard contains a wealth of background and rules  the definitive book for Death Guard collectors. Within this 104-page hardback, youll find: Background - The Wages of Heresy: a detailed history of the Death Guards descent into absolute filth and corruption, driven into a grotesque damnation by the cold ambition of Mortarion, and a description of their homeworld and their enormous, rotting Plague Fleets; - The organisation of the Death Guard: a surprisingly organised and coherent Legion, for all the rot and bloat, with 7 Plague Companies at the head of a vast and diverse force; - The Chronicle of Virulence: a timeline of the Death Guards ten-thousand-year war of sickness waged against the servants of the false Emperor, with an annotated map showing key war zones; - Heraldry and colour schemes for a variety of vectoriums and warbands; - Background and details on each character and unit available to a Death Guard army; - A showcase of beautifully painted Citadel miniatures, depicting the colour schemes of the Death Guard expertly painted by the Eavy Metal team. Rules Everything you need to get a Death Guard army primed for games of Warhammer 40,000 is in here: - 33 datasheets containing rules for every Death Guard unit; - Army abilities reflecting the Death Guards methods of war; - Gifts of the Plague God: wargear both ranged and close-combat used by the Death Guard; - Points values for all miniatures, weapons and wargear for use in Matched Play games; - Scions of Mortarion: rules for Battle-forged armies: - 6 unique Warlord Traits, - 14 unique Stratagems (with a focus on the psychic might of this army), - the Relics of Decay (6 rare artefacts unique to the Death Guard), - the unique Contagion psychic discipline, available to all Death Guard psykers; - 6 unique Tactical Objectives.