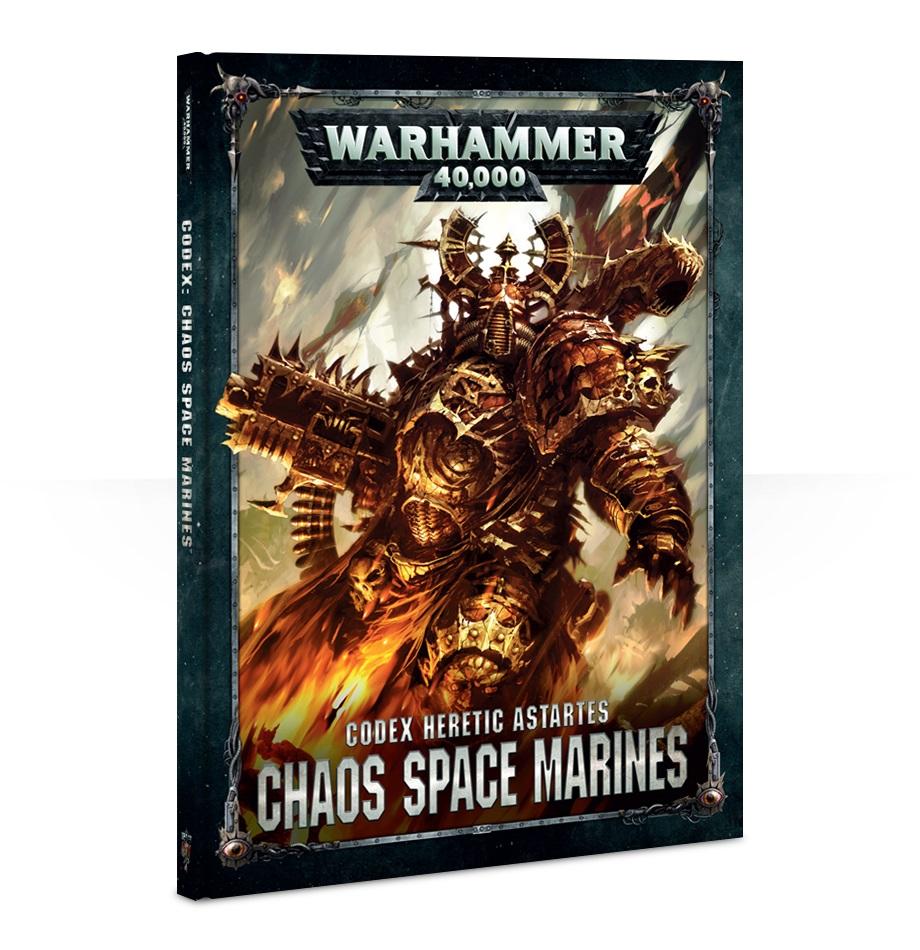 Codex: Chaos Space Marines contains a wealth of background and rules  the definitive book for Chaos Space Marines collectors. Within its pages, youll find: Background - Let the Galaxy Burn: the terrible origin of the Chaos Space Marines, their betrayal of the Emperor during the Horus Heresy that ushered in an era of damnation, a timeline detailing the Ages of Betrayal, Retribution and Apotheosis with key battles and atrocities in gruesome detail (with a further timeline detailing the horrors of Abaddons various Crusades) and a map detailing the current, tainted state of the galaxy; - Information and details of the 7 major Chaos Legions  The Black Legion, Alpha Legion, Iron Warriors, Night Lords, Word Bearers, World Eaters and Emperors Children  with histories, key battles, heraldries and colour schemes for each; - An in-depth look at each of the characters and units available to each Chaos Space Marines army, with appropriately grisly background; - A showcase of beautifully painted Citadel miniatures, depicting the colour schemes of the Chaos Space Marines expertly painted by the Eavy Metal team. Rules Everything needed to get your Chaos Space Marines ready for galaxy-smashing combat in games of Warhammer 40,000 is within: - 45 datasheets covering the Chaos Space Marines range, featuring their rules and statistics for use in games; - Army abilities and wargear lists, alongside a brief explanation of their use and the use of keywords; - Rules profiles for every piece of wargear and every weapon in the Chaos Space Marines arsenal; - Points values for all miniatures, weapons and wargear for use in Matched Play games; - Rules for Battle-forged armies  8 Legion Traits, 1 for each of the original Legions and 1 for Renegade Chapters; - 24 Stratagems of which are Legion-specific; the Dark Hereticus psychic discipline with its 3 powers specific to the Marks of Tzeentch, Nurgle and Slaanesh and 14 weapons and artefacts available only to Chaos Space Marines; - 6 Warlord Traits usable by any Chaos Space Marines Warlord and a further 7 which are Legion-specific; - 6 unique Tactical Objectives for Chaos Space Marines.