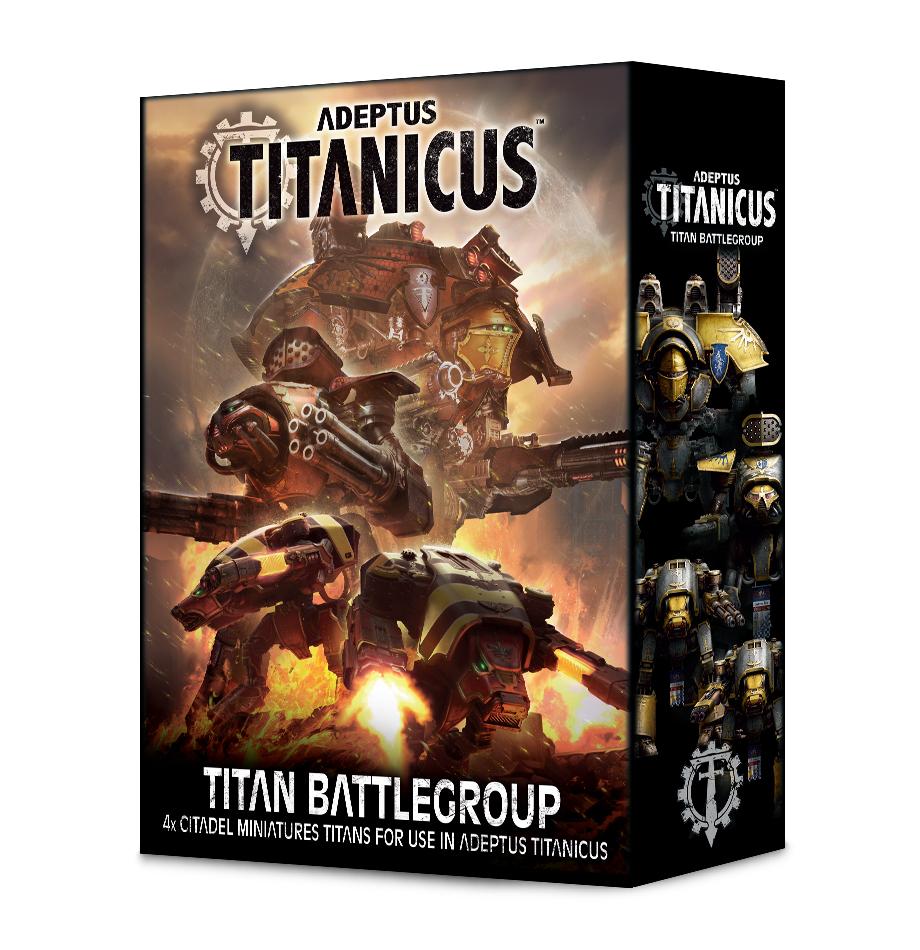 Assemble a powerful battlegroup of Titans and dominate your opponents in games of Adeptus Titanicus with this set of 4 Titans  a Warlord Battle Titan with Volcano Cannon, a Reaver Battle Titan and 2 Warhound Scout Titans. These can be fielded as an Axiom Battle Maniple, leveraging the Might of the Omnissiah to push through the din of war and issue commands despite adverse conditions. Included in the box:

- A Warlord Battle Titan with Volcano Cannon: standing approximately 6 tall, this representation of a colossal god-engine is unbelievably detailed and posable. It is made up of 144 components  while it is possible (and easiest) to assemble this miniature in exactly the pose depicted on the cover of the comprehensive assembly guide found in the box, the advanced hobbyist will find that the hip, knee and ankle joints can be modelled in virtually any position imaginable. As a result, no 2 Titans ever need be built in the same pose, and the details  pistons, hydraulics, exposed machinery and power systems, ventilation  can be truly admired.

The components for the Warlord Battle Titan are split between 3 frames: 1 featuring the inner skeleton, leg and torso assemblies that build the main structure, 1 frame of carapace and armour plates that give the Titan its distinctive shape, with Great Crusade and Age of Darkness armourials allowing you to display your models allegiance (blank examples are included) and a frame of weapons  a Warlord Battle Titan boasts 2 volcano cannon, which are an integral part of the arm assemblies, and 2 carapace-mounted apocalypse missile launchers. The kit also features a choice of 2 heads;

- A Reaver Battle Titan: particularly aggressive-looking, even compared to its contemporaries, this highly-detailed Titan is easily recognised by its flattened face profile and angular carapace. It comes armed with several weapon options  a laser blaster and gatling blaster are available, with a power fist that can be modelled either clenched or open. Above the carapace  of which 2 are included, 1 blank  resides an apocalypse missile launcher, either side of which are the shoulder pads (3 sets are included, 1 set loyalist, 1 set traitor and 1 set blank.) Further modelling options include the knee pads  2 of these are blank, with 1 depicting the symbol of the Opus Titanicus;

- 2 Warhound Scout Titans: Hunched forward, its carapace and head providing it with an exceptionally aggressive and purposeful profile, the Warhound Scout Titan is easily distinguished from its brethren by its uniquely canine head, which sits level with the weaponry attached to the hardpoints on either side. The rest of the Titan is relatively spartan; designed to move quickly rather than stand in a single place, its legs are surprisingly thin  while still far from lightweight. Each kit includes 4 different heads, 4 different carapace designs (2 are Loyalist, 2 are Traitor), shoulder assemblies with Traitor and Loyalist icons available and 3 different sets of greaves  an Imperial eagle design, an Opus Titanica design and a plain set. A small amount of posability is available, as the waist can be turned to provide the illusion of movement.

This set includes 2 Citadel 80mm Round bases, a Citadel 105mm Oval base and a Citadel 120mm Oval base. Also included are 4 transfer sheets with heraldry for the following Legios: Gryphonicus, Fureans, Astorium, Atarus, and Mortis.