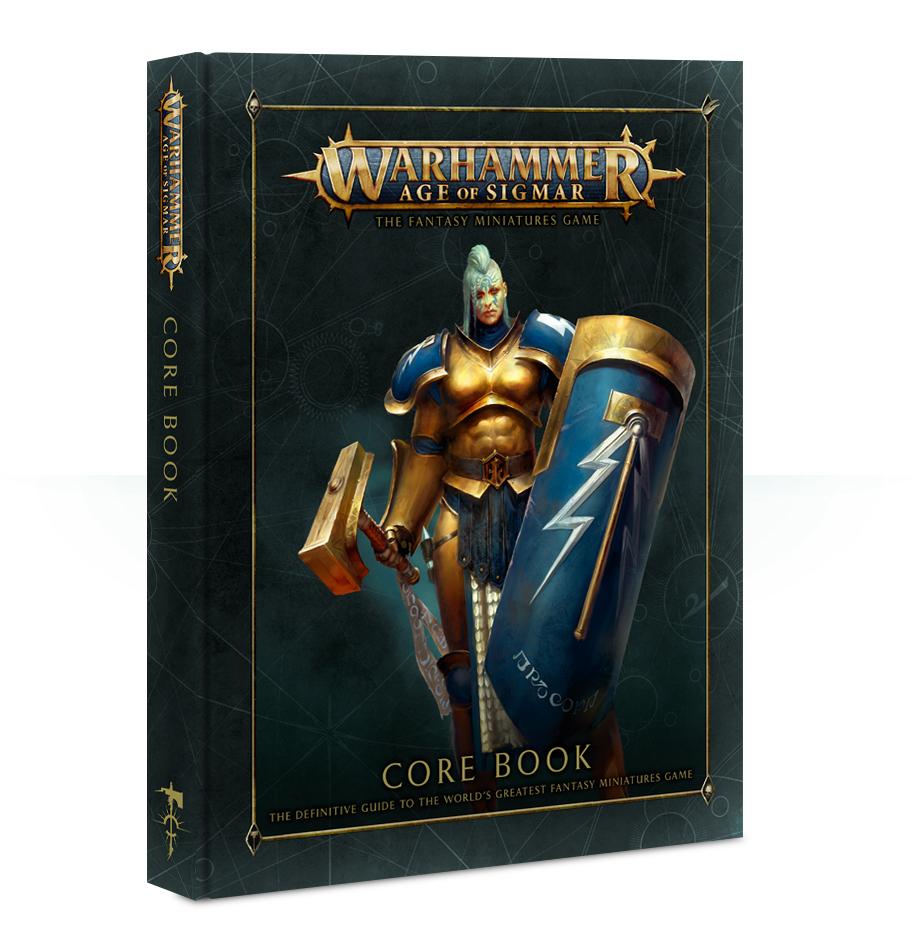 Contained in this 320-page hardback book:

- The Tale of Aeons: this first section of the book contains a detailed, illustrated story-so-far, from the shattering of the world-that-was to the present. This covers 3 major Ages:
- The Age of Myth, Sigmars journey through the cosmos, his meeting with the Great Drake Dracothion and his exploration of the 8 Mortal Realms, his awakening of other gods, the building of civilisations and the fractious alliances that were forged;
- The Age of Chaos, brought about by the machinations of the Chaos Gods and their command of the Realm of Chaos, spitting daemon legions forth and destroying the peace that once reigned;
- The Age of Sigmar, in which vengeance against the Chaos Gods was meted out with celestial fury in the Realmgate Wars, with detailed background on Nagashs dire plan to take back every mortal soul  which he sees as his by right. His necroquake, which has caused every dead being in the Mortal Realms to be reconnected with its essence, has led to wild, untamed magics and undeath taking hold in every realm  and thus the Soul Wars have begun

- The Mortal Realms: background on each of the 8 Mortal Realms  Azyr, Shyish, Ashqy, Chamon, Ghur, Ghyran, Hysh, and Ulgu  details of their links, descriptions of the native civilisations that have risen and fallen, key events that have taken place and notable geological features; along with details of the Realm of Chaos, a nightmarish dimension home to the Chaos Gods and legions of terrifying hellspawn;

The second section of this book contains a wealth of new and updated rules, a veritable treasure chest of ways to play games of Warhammer Age of Sigmar, each rule and each concept entirely optional making it possible to play your games the way you want:

- Battles in the Mortal Realms: containing the core rules, this section is about exploring the fantastical, battle-filled Mortal Realms in your tabletop games. It contains the following:
- The Core Rules: everything from mustering your army to deciding the victor is covered here, with easy to follow guides on the things you need to play a game, how to set them up and how to actually play  how to cast spells, use heroic abilities, move your troops, shoot, charge, fight, and test for battleshock, with illustrated examples and clear explanations of exactly how each phase works;
- An explanation of Triumphs: rewards and bonuses victorious armies can carry over to their next battle;
- Terrain rules, with a table featuring special statuses for scenery pieces and an explanation of how terrain can be garrisoned;
- Details of Battleplans  a set of rules that define how the battlefield is set up, where armies will be placed, objectives to be secured and the final victory conditions of your game, with an easy to follow Battleplan included as an example;
- An explanation of the workings of Warscrolls: every Citadel miniature in the Warhammer Age of Sigmar range has a Warscroll, which provides you with the rules needed to use that miniature in a game. This section shows you how to use the characteristics, abilities, damage tables and keywords of these Warscrolls;
- An explanation of Warscroll Battalions: specially-designed collections of miniatures which have access to unique rules and abilities, often with a narrative focus;
- An overview of Realm of Battle rules: these are rules which introduce specific spells, scenery rules and command abilities according to which of the 8 Mortal Realms in which your battle takes place;
- An explanation of Allegiance Abilities: additional abilities, spells and reinforcement potentially available to your army according to their allegiance, whether Grand Alliance or faction.

- Conquest Unbound: this expands upon the basics explained in the previous section, adding more rules and abilities to your games:
- Grand Alliance Allegiance Abilities: battle traits, command traits and artefacts of power available to armies with allegiance to either Order, Chaos, Death or Destruction;
- Realms of Battle: specific spells, command abilities and terrain rules for 7 of the 8 Mortal Realms (Shyish, Ashqy, Chamon, Ghur, Ghyran, Hysh, and Ulgu);
- Endless Spells: rules for using special spells which remain on the table until out of bounds or unbound, including an Endless Spell Warscroll for the Balewind Vortex scenery piece.

- Open Play Games: a guide to a style of gameplay with no restrictions, allowing you to take any Warhammer Age of Sigmar miniatures to battle with absolute freedom and creativity;
- An Open War Battleplan Generator: a quick and easy way to define how your Open Play games are set up, their objectives, special rules and victory conditions, using either selections from tables or random dice rolls;
- Coalition of Death: rules for assembling 2 teams of players and combining their collections into 2 armies, with 3 Battleplans designed specifically for team-based games; - Ladder Campaigns: rules for fighting linked campaigns, with participants fighting over rungs of a ladder, each hoping to reach the top.

- Narrative Play Games: a guide to basing your games on stories, either of your own devising or the rich and varied tales found in the Warhammer age of Sigmar publications, from planning your game, finding stories to tell and deciding on an optional Games Master;
- War in the Glymmsforge Catacombs: an example narrative battle, with an annotated photo of the games setup featuring example rules;
- Historical Battles: a guide to setting up battles according to stories youll find in the many and varied Warhammer Age of Sigmar publications, with an annotated example battle taking place during the Quest for Ghal Maraz;
- A guide to narrative campaigns, including linked games, map campaigns and tree campaigns featuring a pre-made tree campaign for two players;
- Sieges in the Age of Sigmar: special rules for creating sieges, with rules for attacker and defender, tactics and effects, and command abilities. 2 Siege Battleplans are included;
- Darkest Depths: rules for fighting in the tunnels and caverns beneath the Mortal Realms, with specific command abilities and rules for gloom and darkness, unstable surroundings, monsters, as well as command abilities. 2 Darkest Depths Battleplans are included;
- Triumph & Treachery: rules allowing 3 or more players to take part in a multi-sided battle, employing a variety of devious schemes (involving bribery and treachery) to win. Includes optional Secret Objective rules, and 2 Triumph & Treachery battleplans.

- Matched Play Games: the ultimate way for players to test their mettle in evenly-balanced conflict, this is the way to play games of Warhammer Age of Sigmar and prove your skill, tactical ability and strategic nous;
- Pitched Battles: played as one-off games or part of a tournament, Pitched Battles are designed to be set up with a minimum of fuss. Details of army sizes for different battle lengths, rules for fielding Warscroll Battalions and Allied units are covered;
- Battle Strategies: a variety of objectives and strategies designed to provide challenge to players, forcing them to adapt to unpredictable effect, with a D66 table providing a random element;
- A blank Pitched Battle Army Roster, for you to photocopy and use when assembling your pitched battle armies.