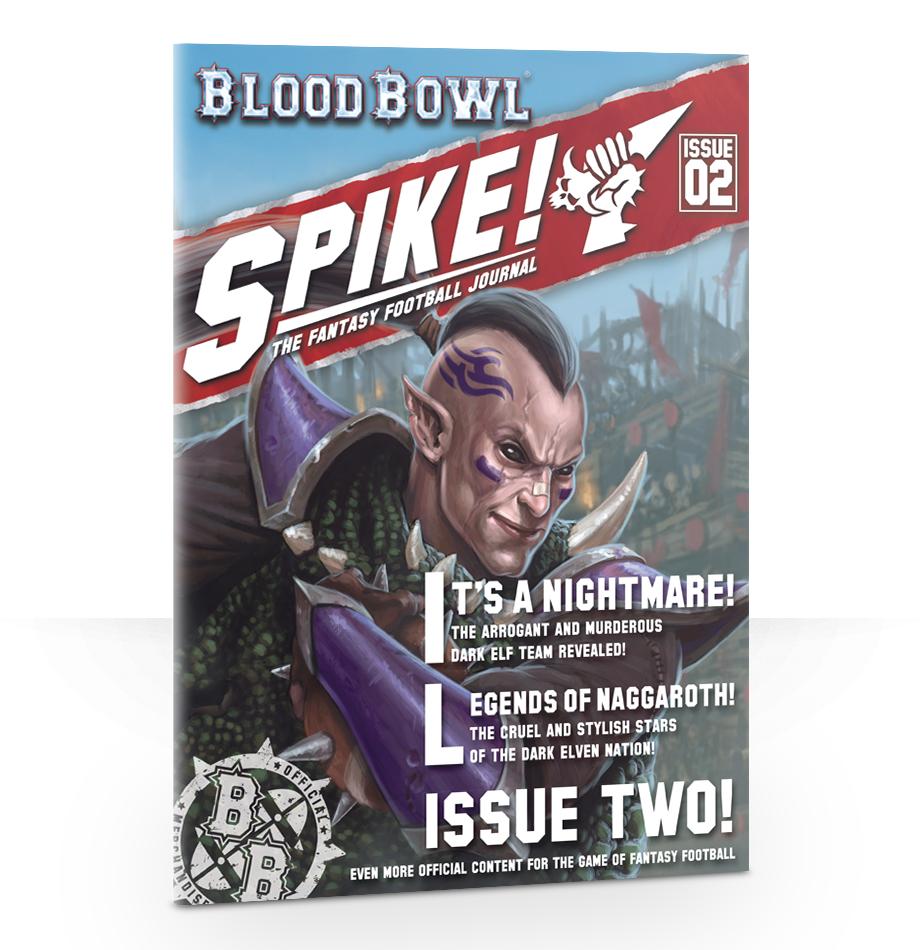 Guest edited by Mali Keith, this is the second issue of Spike! Journal. Covering the Dark Elves, with a veritable host of brand-new content for Blood Bowl, this is sure to be a must-have for every player  not just the cruel and unusual fans of Dark Elves... Contained in the 36-page journal:
- The Darkest of the Dark!: details and background on the Dark Elves, one of the most enigmatic and stylish races to ever set foot on the Blood Bowl pitch. Youll learn how their player roles operate, and read up on some of their most famous teams: The Darkside Cowboys, Kelethrai Executioners, The Harpies of Karond Kar, and The Black Ark Corsairs. Theres even a team roster and more than 9 (i.e. 10) Star Players!
- Chat With the Rat: this issue, intrepid Skaven reporter Hackspit the Scribbler Quillchewer shoots the breeze with Miraculous Monty of Cabalvision and the notorious Hubris Rakarth;
- Coffin Corner: a sensitive and poignant look back at some players who are no longer with us, have passed on, will never again grace the pitch. Because theyre dead;
- The Naggaroth Nightwings: in-depth background on this Dark Elf team, from their early history, their travails after the collapse of the NAF to the present. Includes team colours, honours, Spike! Team rating as well as a roster of their 2479-2480 squad;
- Star Player Spotlight: a profile of Jeremiah Kool, a legendary Dark Elf player. Includes his in-game cost, stats and skills, and career highlights;
- Dirt From the Dugout: Mindy Piewhistle takes a trip to Ulthuan to uncover the shocking secrets of Elven fans; - Star Player Spotlight (yep, another one): a profile of Roxanna Darknail, a Witch Elf who can play for Amazon and Dark Elf teams. Includes her in-game cost, stats and skills, and career highlights;
- Cruel and the Gang: an introduction to coaching Dark Elves, which should set you up nicely on the path to stylish glory. Includes an overview of the strengths of their team, advice on basic tactics and set-ups, as well as guidance on developing a team as it progresses through a league;
- Star Player Spotlight (3 Spotlights in the same issue? Madness!): a profile of Hubris Rakarth, who can play for Dark Elf and Elven Union teams. Includes his in-game cost, stats and skills, and career highlights;
- Lesser Known Dark Elf Star Players: a veritable glut of profiles, in-game cost, and stats and skills of the following Star Players: Kiroth Krakeneye, Elijah Doom, Horkon Heartripper, and Mordrix Hex;
- Sideline Assistance: a whole bunch of new inducements for all Blood Bowl teams  sideline staff include specialist coaches, temp agency cheerleaders, weather mages and Druchii sports sorceresses (the latter available only to Dark Elf and Elven Union teams);
- Mighty Blow!: tales of sporting glory from the career of all-time Star Player Bob Bifford, presented as an all-new comic strip drawn by the legendary Blood Bowl illustrator Pete