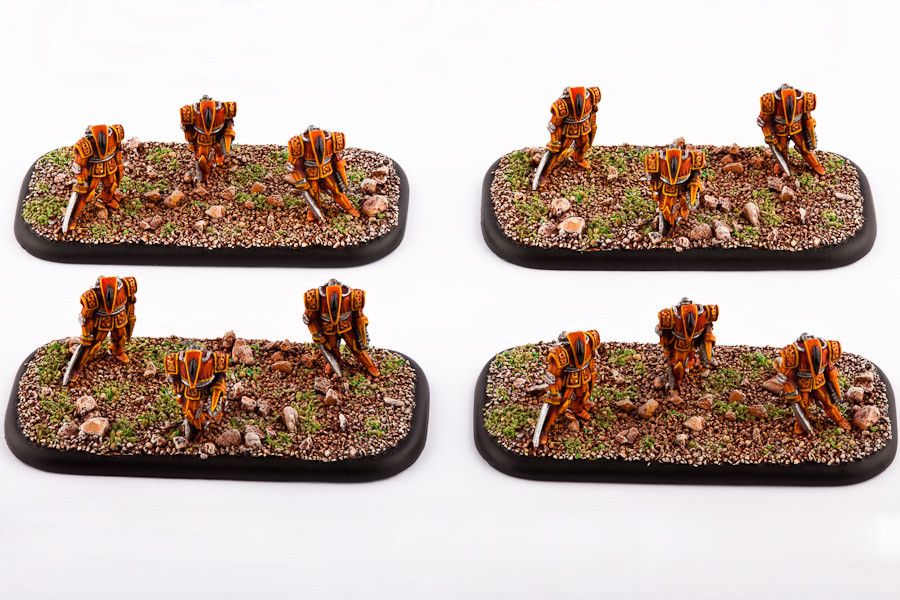 The Firstborns are unusual amongst the Shaltari, since their spirit still inhabits the original body they were born with. Even as adults, these individuals are impetuous and fiery in the eyes of older Shaltari. Their enthusiasm, bloodlust and recklessness has yet to be dimed by the trials of living many lifetimes in a dangerous universe.

Keen to prove themselves both in bravery and in deeds, many of these young Shaltari join the Firstborns, an elite cadre of close combat troops. In Shaltari society, there are few better ways of proving one's bravery in martial terms. Also, their natural aggression and potency serves them well in the crucible of room to room combat, where Firstborns are noted for their savagery and bloodlust.

Equipped with a similar model of Warsuit to ordinary Braves, the Firstborns can overcome their physical limitations to become 8 foot tall towering avatars of destruction. They are armed with Shaltari energy swords, a weapon linked with honour and martial prowess. It's almost unheard of to see swords actually used in combat anywhere else in the 27th century. The Firstborns make these apparently archaic weapons particularly deadly in room clearance in conjunction with the Wave Pistol, a handheld version of the Microwave gun. This can utterly incapacitate a biological target into an agonized wreck, allowing its user to advance and deliver the coup de grâce with the Energy Sword.