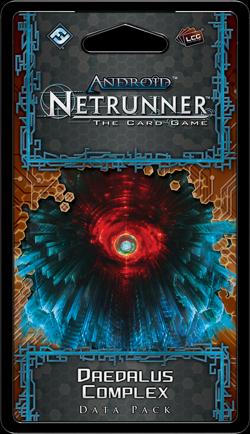 After previous Data Packs have explored the game's cyberstruggles with the settings of Luna, SanSan, Mumbad, and a New Angeles wracked by economic chaos, Daedalus Complex and the Red Sand Cycle turn our attention to Mars. There, terraforming is already well underway, and millions of humans live alongside clones and bioroids in a handful of cities and nodes protected by transplas domes.

Still, life on the Red Planet is markedly different than life on Earth. It requires a certain ruggedness to live and work on a planet where simply traveling outside of the protected cities requires breathing assistance and protective gear. The shared hardships of survival have led to the de facto authority of the clans, and even though the Martian Colony Wars have ended, the tensions between the clans, the Martian Colonial Authority, and the corps remain high.

This is the volatile situation into which we are thrust by the sixty new cards (three copies each of twenty different cards) of Daedalus Complex. Named for the site where the Martians have developed the foundation for a space elevator similar to the Beanstalk on Earth, Daedalus Complex takes us deep into the conflicts between corps, clans, and the MCA. What we find is that Mars very much remains a semi-lawless frontier and one in which any given spark has the potential to ignite a much larger flame.