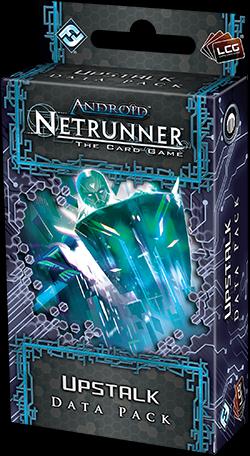 The lag. It was 1.2 seconds. That could mean only one thing. He was accessing a node outside of the earths atmosphere. He started a mapping protocol.\r\n\r\nWelcome to a life one-point-two seconds out of the ordinary!\r\n\r\nWhen cyber explorer Nasir Meidans obsessive search for the nets legendary source protocols leads him beyond the reaches of Earths atmosphere, he discovers powerful fragments of pure coding, startling new ice, and a wealth of data that neither he nor anyone else could have ever expected\r\n\r\nFantasy Flight Games is proud to announce the upcoming release of Upstalk, the first Data Pack in the Lunar Cycle for Android: Netrunner!\r\n\r\nWhat can happen in one-point-two seconds? With its sixty new cards (three copies each of twenty different cards), Upstalk transports Android: Netrunner to an all-new meat space: the moon. Here, the game defies standard expectations. Runners and Corps explore new strategies, as do many of the games cards and mechanics. Here, Corporate trace attempts can punish Runners even when they fail. Corporate assets are everywhere, theres no life outside of Corporate-sponsored air, and theres a chance that those who manage or run the net may encounter a shard or fragment of the mythical source code.\r\n\r\nIt takes an adaptable mind to navigate lunar lag. Many have tried. Few have succeeded. When the cyberstruggles of Android: Netrunner head to the moon, will you try to run lunar servers from the earth? Or will you assemble your rig Upstalk?\r\n\r\n\r\n\r\nLead Developer Lukas Litzsinger on the Lunar Cycle\r\n\r\nThe instant you open the first Data Pack of the Lunar Cycle, youll likely notice that something has changed Things are different up here, on the moon. In New Angeles, you had weight; there was solid ground to stand on. Now you are lighter. Floating. What worked before might not work in less gravity. Runs change. Runners change. Corporations change. Also, here, the Corporations come first.\r\n\r\nAs the card pool has grown, I wanted to strike out into new territory. The game doesnt need as many cards to boost existing deck types, so most of the cards in the Lunar Cycle were designed to disrupt current patterns of play and make the flow of any game less predictable.\r\n\r\nGenerally, most games of Android: Netrunner can be broken down into three stages: the early game, the mid-game, and the late game. Historically, the early game belongs to the Runner, who looks to score as many agenda points as possible before the Corp can rez its defenses. In the mid-game, the Corp has established enough defenses to start scoring some points. Then, in the late game, the Runners rig is fully assembled, the Corporations defenses become vulnerable, and no agenda is safe. The most powerful Runner decks try to extend the early portion of the game as long as possible, and may even prevent the mid-game stage from ever occurring. And many of the best Corp decks are able to win the game in any stage, often by flatlining a careless Runner.\r\n\r\nThe Lunar Cycle blurs the boundaries between these stages, and even allows players to roll-back the game to a previous stage. It does so in several ways. First, a number of cards allow the Corp to exert more influence over the tempo of the game. Up to this point it has been difficult for the Corp to slow down the Runner. Damage could do it, but the Runners economy was almost untouchable. No longer. Another way that the tempo of the game changes is with new identities. These identities each encourage a unique play style, and carve out their own space rather than reinforce the current meta. Lastly, the most powerful cards in the set are not the easiest ones to use. If you want to unlock the potential of the Lunar Cycle, you must be willing to experiment. Youll need to take risks during the course of the game.\r\n\r\n\r\n\r\nWhile most of the cards in the Lunar Cycle offer new and fresh takes on the games struggles, there are also a number of cards that expand upon existing themes and mechanics. As we move forward with the game, its important to both maintain a sense of continuity and also pave the way for future cards.\r\n\r\nIf thats not enough to get you excited, here are some more interesting tidbits about the cycles upcoming cards:\r\n\r\nAn icebreaker has the ability to pump by seven strength for a single credit.\r\nThe number of the games unique cards will increase by roughly fifty percent.\r\nThere is a new identity in every pack.\r\nOne card allows you to potentially change any piece of ice into a Janus 1.0 (What Lies Ahead, 12).\r\nIt will become possible for the Corp to Snare! (Core Set, 70) a Runner during a run on Archives.\r\nI hope you enjoy the cards in this cycle as much as I enjoyed designing and developing them. Enjoy the ride, and dont forget to buckle up. Its a half-day journey up the Beanstalk!\r\n\r\nCan You Keep Your Bearings in Zero Gravity?\r\n\r\nJust as travel to the moon would challenge you to adapt to reduced gravity, Upstalk and the other Data Packs in the Lunar Cycle will soon challenge players to establish new baselines and experiment with new techniques and technology.