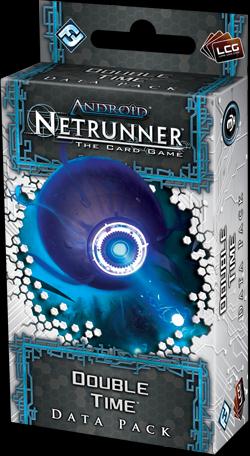 Dont try to anticipate every move. Just anticipate the moves that matter.\r\n Reina Roja\r\n\r\nFantasy Flight Games is proud to announce the upcoming release of Double Time, the sixth and final Data Pack in the Spin Cycle for Android: Netrunner!\r\n\r\nWhile it has drawn new attention to the games mechanics for traces and bad publicity, the Spin Cycle has also introduced a number of powerful Double events and operations, each of which requires its owner to spend a click to play it, in addition to its normal costs. In a game thats as full of bluffs, counter-bluffs, risks, and gambles as Android: Netrunner, Doubles demand a heavy investment of the actions available on any given turn, but if you play them right, they offer tremendous rewards. In Double Time, youll find a significant focus on these events, as they represent twenty-one of the Data Packs sixty new cards (three copies each of twenty individual cards).\r\n\r\nWill you sacrifice versatility for raw power? Its time to Double down!\r\n\r\n\r\n\r\nThe Red Queen Makes Her Move\r\n\r\nWhile she appears in the cycles third Data Pack, Mala Tempora, its in Double Time that the Red Queen, Reina Roja (Mala Tempora, 41), finally reveals the true nature of her most daring gambit.\r\n\r\nQueens Gambit (Double Time, 102) is a zero-credit Double event that can score up to six credits. However, to earn those six credits in just two clicks, you have to place three advancement counters on an unrezzed card in one of the Corps remote servers. The gamble, here, is that youre likely helping the Corp score an agenda or increasing the potency of a potential Ambush. Of course, neither of those options is particularly enticing, so youll likely want to find some way to cheat the wager.\r\n\r\nYour first recourse is to expose the card. You could play Infiltration (Core Set, 49) to find an unrezzed card like Melange Mining Corp (Core Set, 108) that wont offer the Corp any advantage for the advancement counters you place on it. Then Queens Gambit becomes a guilt-free grab of six fast credits.\r\n\r\nAnother option is to simply destroy whatever card you advance. The Anarchs gain another Double event in Double Time, the server-smashing Singularity (Double Time, 101). With the four clicks available to you in a single turn, you could gain six credits from Queens Gambit and then trash whatever card you advance with Singularity, along with all the other cards in that server. This offers the Runner a good way to deal with troublesome Corp upgrades like SanSan City Grid (Core Set, 92) and Ash 2X3ZB9CY (What Lies Ahead, 13). It also plays well into any Anarch strategy that wants to access cards from the Corps Archives. If that card you advanced actually was a Project Junebug (Core Set, 69), youll feel validated when your Singularity trashes it and you find it, later, in the Archives.\r\n\r\nRestructuring\r\n\r\nCorp players also gain intriguing new Doubles in Double Time. As an example, NBN gains the Double operation, Corporate Shuffle (Double Time, 113).\r\n\r\nIn its simplest use, Corporate Shuffle allows the Corp player to refill his hand to five cards for the cost of two clicks. Typically, the Corp is wary of drawing too many cards out of R&D. This is because HQ is a common target and because the Corps accelerated card draw moves it closer to the loss condition that occurs if its ever forced to draw from an empty R&D. However, its rarely good to be completely starved of cards and the options they represent.\r\n\r\nThat said, the real strength of Corporate Shuffle may lie not in its ability to get cards into HQ, but in its ability to get cards out of HQ. Ideally, the Corp wants to draw its agendas, along with a steady mix of ice, operations, upgrades, and other cards that it can use to guard those agenda points from the Runner. However, its not entirely uncommon for a poor shuffle to distort that mix, and the Corp player may end up with several agendas in hand and no way to protect them.\r\n\r\nHere, Corporate Shuffle becomes an effective protective measure for the midgame. It costs less than the ice the Corp player would likely need to end one or more runs, and it can bury those agenda points back in R&D where the Runner may not be able to access them. Certainly, theres a chance that the Corp could simply draw back into the same number of agendas, or more, but when youve got six more agenda points in your hand, the benefits certainly outweigh the risks.\r\n\r\nFinally, Corporate Shuffle may help the Corp draw one or more key cards. While Android: Netrunner doesnt focus on card combinations the same way many other card games do, it does feature a number of strategies, such as the ever-popular tag and bag strategy, that hinge upon one or more key cards. Corporate Shuffle offers the Corp one more option to help pull those pieces together as quickly as possible.\r\n\r\nIts Time to Double Down\r\n\r\nAndroid: Netrunner is full of bluffs, baiting, traps, and trickery. As the Corp and Runner engage in their high-stakes, cat-and-mouse cyberstruggles, they probe each others weaknesses and look for ideal moments to strike. Neither ever has the benefit of perfect information, so sometimes the best that either can do is make a plan and double down.