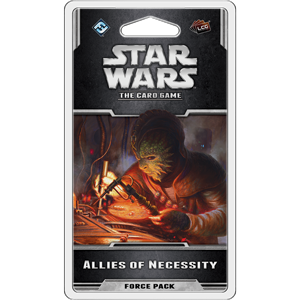 Do you want to know the odds of her using that blaster on you? Its high. Its very high. K-2SO, Rogue One

If anything defines the Star Wars saga more than the lightsaber duels, blaster firefights, and epic space battles, its the friendships that emerge out of hardship and necessity. Whether its Luke Skywalker and Obi-Wan Kenobi looking for a smuggler to take them offworld or ex-convict Jyn Erso forced to work with a ragtag group of Rebels, outcasts, and Imperial defectors, these alliances can determine the fate of the entire galaxy.

Within Allies of Necessity and the new Alliances cycle for Star Wars: The Card Game, you gain plenty of incentives to bring multiple affiliations together. While multi-affiliation decks have always been a possibility, Allies of Necessity offers more tools to help you than ever beforestarting with new affiliation cards, which offer new deckbuilding requirements and special abilities. Whats more, youll find iconic characters from Rogue One, Star Wars Rebels, and the Darth Vader comics throughout the cycle: in fact, this first Force Pack includes Doctor Aphra, Director Krennic, Captain Cassian Andor, and Jyn Erso.

With eight new objective sets (two copies each of four distinct sets), and twelve brand-new affiliation cards (two for each affiliation), Allies of Necessity promises to change your games like