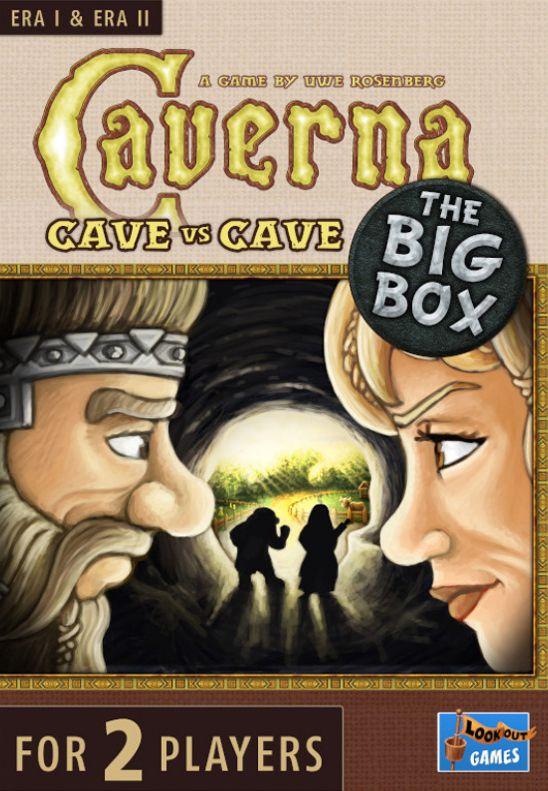 In the two-player game Caverna: Cave vs. Cave, each player starts the game with only two dwarves and a small excavation in the side of a mountain. Over the course of eight rounds, they\'ll double their workforce, open up new living space in the mountain, construct new buildings and rooms in which to live, and dig for precious metals.

In more detail, each player starts the game with an individual player board that\'s covered with a random assortment of face-down building/room tiles and only one space. Some tiles are face up and available for purchase at the start of play. Four action tiles lie face up as well. At the start of each of the eight rounds, one new action tile is revealed, then players alternate taking actions, with the number of actions increasing from two up to four over the course of the game. As players excavate their mountainous player board, new building and room tiles are added to the pool; some rooms can be used immediately when acquired, whereas others require the use of an action tile.

After eight rounds, players tally their points for buildings constructed and gold collected to see who wins.

In Caverna: Cave vs Cave â Era II, players start exploring a side cave abundant in ore. Donkeys help you move the ore to the surface so that you can cast iron and forge weapons out of it â to protect your cave from anyone who wishes it harm, of course. In the meantime, your tribe has grown four primates capable of work. Keep on collecting grains, fibres, and building resources to increase your wealth. Shortly you will be engaging in agriculture...

Caverna: Cave vs Cave â The Big Box contains all of the material in the base game and first expansion in a single package.