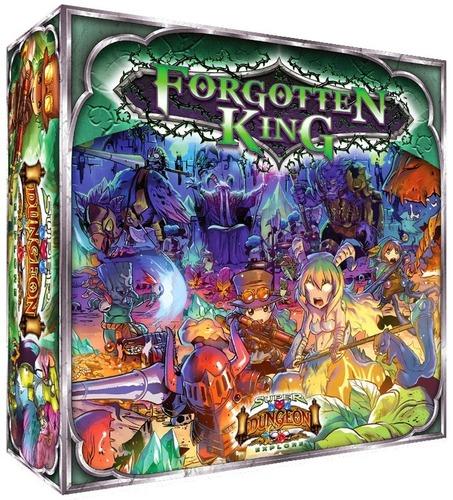 Princess Emerald and her companions are questing deep into the Lordship Ruins to confront the evil that resides there. Brooding from his darkened hallways, the Forgotten King is a cursed lord who has pledged himself to the service of the Dark Consul, darkening his once lush and verdant lands. At his side are two new mini-bosses: Trent, a towering guardian of the forest with thick bark and brambles for armor, and Boris, a raging brute with snarling ursine features.

In Super Dungeon Explore: Forgotten King, players explore the Fae Wood, home of the Kodama, sentient forest spirits with a taste for adventuring Heroes. Wisps lure Heroes into ensnaring traps as terrifying, man-eating plants sprout from the loamy forest floor to devour them. Continue into the Lordship Ruins where the once proud bramble knights, now corrupted and twisted into servants of the Dark Consul, stalk the stony ruins for any who would defile their lord\'s holdfast. Don\'t get too close to the trees, though, as we hear the squirrels are in an ill mood.

Super Dungeon Explore: Forgotten King includes five new Heroes to brave the depths, including the Thundervale Huntress, Fae Alchemist, Royal Warden, and the brave Questing Knight. Each lend a new dynamic to gameplay and your strategy to conquer the Forgotten King and his minions.

Forgotten King contains two play modes: Classic Mode, in which someone controls the dungeon and its monsters while everyone else takes the roles of the plucky heroes, or Arcade Mode, which allows for a fully co-operative game for up to five players.

Forgotten King, while itself a standalone game, is compatible with all previously published Super Dungeon Explore expansions and supplements.