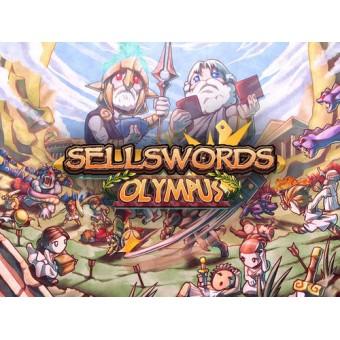 The gods of Olympus have gone to war! Who will heed the call? Skilled warriors from all across the land rally to fight, met on the opposite side by magical beasts and monsters from myth. Lead your heroes to victory and become the champion of Olympus!

Sellswords: Olympus is a fast-paced strategy game of drafting soldiers and deploying them to the field of battle. It takes only a few minutes to learn, but with fifty different heroes and monsters, each with their own unique ability to use and master, the possibilities for forming your army are limitless! Capture enemy units to turn them to your side in the battle. It\'s not enough to simply control the most of the field, though; you have to choose your targets carefully to outflank your opponent! Four different terrain tiles provide alternate play methods, giving you new strategies to explore!

Sellswords: Olympus is a standalone sequel to the tile-placement game Sellswords that can be played alone or mixed with the original!