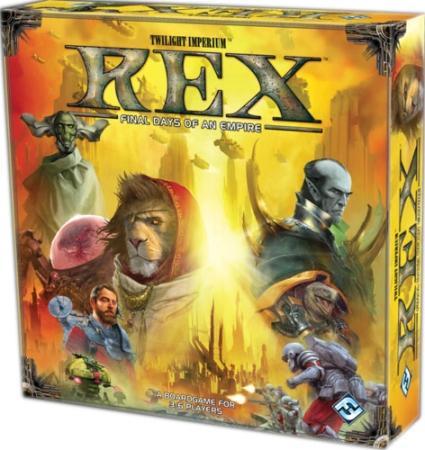 Rex: Final Days Of An Empire

The Age of Twilight began with a small conflict over the Quann passage. What then seemed a minor dispute was to become the first drop in the flood of war. From Quann, a thousand skirmishes and disputes quickly erupted across the galaxy. The ruling Lazax desperately sought to maintain their disintegrating imperial authority, disbursing their forces far and wide. It was all in vain. Centuries-old secret ambitions and ancient grudges had finally found their outlet, as race rose up against race in the name of sovereignty, rebellion, and self-defense.
The final days of the Lazax Empire began in the seventy-third year of the Twilight Wars, when without warning, the Federation of Sol led a deadly assault directly on Mecatol Rex, the capital planet of the empire itself. A climactic struggle for control of the imperial city followed, fought as much with diplomacy and deception as with troops and starships.

This is the story of that struggle.

Rex: Final Days of an Empire is a board game of negotiation, betrayal, and warfare in which three to six players take control of great interstellar civilizations, competing for dominance of the galaxy's capital city. Set 3,000 years before the events of Twilight Imperium, Rex tells the story of the last days of the Lazax Empire, while presenting players with compelling asymmetrical racial abilities and a myriad of opportunities for diplomacy and deception.