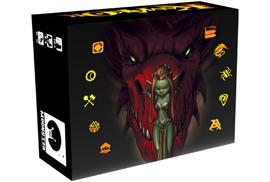 Players are warlords recruiting armies of goblins. You'll start off playing lowly first level goblins, but as you play, your army will grow include more powerful warriors. Recruit these stronger fighters by placing them above weaker goblins from the same clan. When they come into play, your goblins will let you draw more cards, eliminate opposing goblins, and other exciting and deadly maneuvers that will leave your opponents quaking.

Once all the players are done, either because they don't want to play more cards, or because they can't, the round is over. The player with the strongest army, as determined by adding up the value of his goblins, wins a battle. When you've won three battles, you win the war and the game.

Inside Kamakor, the expansion to Gosu, you'll discover standard bearers, new first level goblins, and new cards with Dragoons symbols and the tokens you'll need to activate them. The addition of clan tokens will allow players to choose the five clans who will participate in your war.