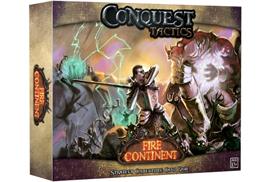 Conquest Tactics is a strategy card game with a fantasy theme. Players lead their armies across a battlefield to clash with their opponent, employing hand management, resource allocation and battlefield strategy to outwit each other. Players deploy troop cards to a grid battlefield and pay tactical points to move, attack and cast spells. Skills and Spells are taught to a player's entire army and reused each turn. Each player chooses from a selection of victory conditions and must achieve three victory conditions to win the match.

The first chapter of Conquest Tactics features three army factions, but troops from different factions may be combined into one deck.

• Humans a balanced faction with a wide variety of Spells and Skills
• Kaborha a powerhouse faction with strong, expensive troops and an emphasis on melee skills
• The Malice a swarming faction with overwhelming numbers and a penchant for dark magic

Each deck has one base which serves as a stronghold and is one of the principal sources of a player's power. Bases give their armies additional strengths such as the ability to upgrade troops faster or replace fallen troops. However, Bases are not without their weakness as they may be destroyed, removing the benefits granted by it.