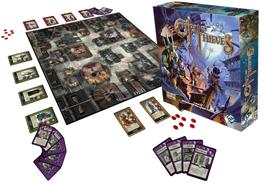 Cadwallon: City of Thieves is a fast-paced game of cunning thievery and ruthless skullduggery in a fantasy city steeped in magic and intrigue. Two to four players each control their own gang of four thieves, competing to amass the greatest haul of loot from the many carefully locked chests scattered about the board. This is no friendly competition, however, and there is little loyalty among thieves in Cadwallon! The most successful players are as likely to claim their loot from the other gangs as they are to do the time-consuming legwork themselves. And always there is the Guild, directing the gangs from the shadows, and offering rich rewards to those who follow its will. But there is little time to waste; even the slow-witted militiamen will eventually raise the alarm... and woe be upon any thief who fails to creep away before the lawmen seal the district!

The revised edition of Cadwallon: City of Thieves uses the same mechanics and artwork as before, but presents a clarified rulebook and improved clarity on cards and reference sheets.